Among the most promising of emerging technologies for illumination in optical microscopy is the light-emitting diode (LED). These versatile semiconductor devices possess all of the desirable features that incandescent (tungsten halogen) and arc lamps lack, and are now efficient enough to be powered by low-voltage batteries or relatively inexpensive switchable power supplies. The diverse spectral output afforded by LEDs makes it possible to select an individual diode light source to supply the optimum excitation wavelength band for fluorophores spanning the ultraviolet, visible, and near-infrared regions. Furthermore, newer high-power LEDs generate sufficient intensity to provide a useful illumination source for a wide spectrum of applications in fluorescence microscopy, including the examination of fixed cells and tissues, as well as live-cell imaging coupled to Förster resonance energy transfer (FRET) and lifetime measurement (FLIM) techniques. The interactive tutorial featured in this section explores the ZEISS Colibri LED illumination system for widefield fluorescence microscopy.

The tutorial initializes with a cut-away view of the ZEISS Colibri illuminator in operation, transitioning through a 4-color sequential excitation mode with the resulting specimen images being displayed in the Specimen Image window. To operate the tutorial, click on any of the diode buttons beneath the cut-away to activate or deactivate individual units. A cut-away of diode modules can be obtained by clicking on the Show LED Module Cutaway check box. The interval between image captures can be adjusted with the Image Interval slider and a new specimen can be loaded using the Choose Specimen pull-down menu. The tutorial can be halted by clicking on the Stop button.

Compared to laser light, the wider bandwidth featured by LEDs is more useful for exciting a variety of fluorescent probes, and compared to the excessive heat and continuous spectrum emitted by arc lamps, LEDs are cooler, smaller, and provide a far more convenient mechanism to cycle the source on and off, as well as to rapidly select specific wavelengths. Commercial LED illumination units designed for fluorescence microscopy have been introduced by several manufacturers, and despite their weaker emission intensity when compared to the bright spectral lines of mercury and metal halide arc lamps, current trends in LED development point to the expectation of significant increases in brightness throughout all wavelength regions in the next few years. Furthermore, recent advances in LED technology targeted at producing die crystals having a geometry that decreases light loss through internal reflection should help generate devices that can be incorporated into virtually all applications in fluorescence microscopy. Illustrated in Figure 1 are the LED emission spectral profiles for several commercially available diodes. The spectra were recorded at the microscope objective focal plane using a broadband mirror positioned in a fluorescence optical block. 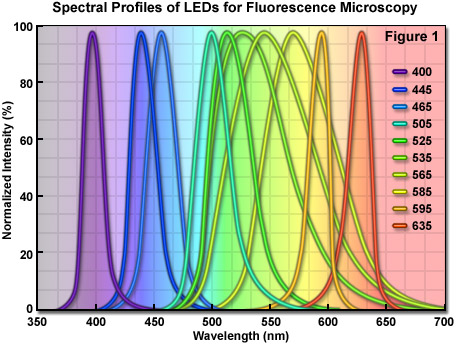 In contrast to arc lamps, which exhibit a high degree of intrinsic radiance or brightness, LED technology has slowly evolved from rudimentary devices that were capable of providing only a thousandth of a lumen of red light in the late 1960s. During the past four decades, however, LEDs have advanced at a pace that rivals microprocessors. Similar to the prediction by Gordon E. Moore that the number of transistors on a computer chip would double every two years, Agilent Technologies scientist Roland Haitz predicted that the brightness of LEDs would increase by a factor of 20 every 10 years. In fact, what is now termed Haitz' Law has proven to be reliable because LEDs have historically doubled in brightness every two years and are expected to continue this dramatic growth in performance. As their brightness and the range of available colors has increased, LEDs have been put to use in a variety of new applications, including the role of an energy-efficient and durable replacement for incandescent lamps for home and industrial lighting. In addition, high-performance LEDs are now being used in a variety of other industrial, medical, and military applications. Among the many examples are navigation, robotics, machine vision, endoscopy, and diagnostic instrumentation. In the future, there should be an increasing demand for high brightness light sources based on LED devices in areas of the economy that have substantially more market power than optical microscopy. This demand will no doubt provide a driving force for the development of powerful LEDs emitting in all spectral regions, thus benefiting all illumination modalities in optical microscopy.