Among the most useful FRET applications in cell biology is a technique that involves the fusion of two fluorescent proteins to the ends of an environmentally sensitive protein or peptide to act as a biosensor of specific cellular functions. Fluorescent protein biosensors have found widespread utility in reporting on a diverse array of intracellular processes. By creatively fusing FRET-capable pairs of fluorescent proteins to biopolymers that perform critical functions involved in various aspects of physiological signaling, research scientists have developed a host of new molecular probes that are useful for optical live-cell imaging of important processes such as calcium wave induction, cyclic nucleotide messenger effects, pH, membrane potential fluctuations, phosphorylation, and intracellular protease action.

The tutorial initializes with a fluorescent protein FRET biosensor containing a sensory domain and a substrate appearing in the left-hand portion of the window. The live-cell specimen image corresponding to the current state of the biosensor is presented in the Specimen Image window and the spectrum of the biosensor is presented in the Spectral Analysis window. In order to operate the tutorial, use the Biosensor State slider to toggle the biosensor between a FRET "on" and a FRET "off" state. Additional biosensors can be selected using the Choose A Biosensor pull-down menu.

Spectral imaging has been very useful for the examination of fluorescent protein biosensors to determine the presence or absence of FRET in response to a biological stimulus. The methodology requires obtaining a spectrum of the biosensor in the presence and absence of the stimulator to determine whether FRET is observed or eliminated and to monitor the dynamic range of the response. Thus, by creatively fusing pairs of fluorescent proteins to biopolymers that perform critical functions involved in various aspects of physiological signaling or other biological activities, a number of investigators have developed a host of new molecular probes that are useful for optical live-cell imaging of important metabolic and signaling processes. Typically, two fluorescent proteins (usually a cyan and yellow variant) are inserted on opposing ends of a sensor protein or peptide sequence (see Figure 1), as briefly described above. Changes in the conformation of the sensor protein produce corresponding tertiary alterations in the structural organization of the complex, and thus, the level of FRET that can be observed between the flanking fluorescent proteins. A ratiometric change in the fluorescence output of the donor and acceptor using a single excitation parameter coupled with spectral imaging is becoming a popular methodology to examine these biosensors. 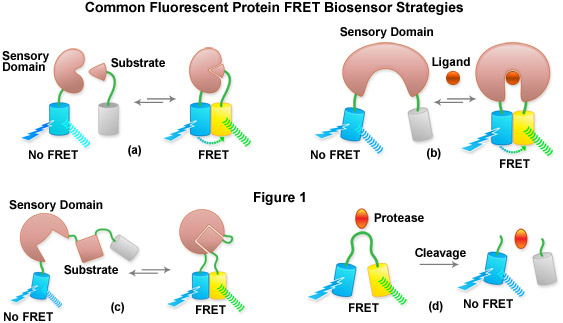 Presented in Figure 1 is a cartoon illustrating common fluorescent protein biosensor construction strategies. Cyan cylinders represent CFPs, gray cylinders represent YFPs without FRET, and yellow cylinders represent YFPs with FRET. Blue lightning bolts indicate excitation at 450 nanometers and parallel waves are fluorescence emission (at 475 nanometers, cyan; or 530 nanometers, yellow). Sensory domains are flesh-colored and effector agents are spheres or ellipses. Figure 1(a) shows intermolecular FRET between a separate sensory domain and substrate fused to CFP and YFP, respectively, while Figure 1(b) depicts a fluorescent protein biosensor featuring a single sensory domain and effector ligand. Binding of the substrate to the sensory domain in Figure 1(a) produces FRET whereas binding of the ligand in Figure 1(b) induces a conformational change in the sensory domain to bring the fluorescent proteins into the correct proximity for energy transfer. In some cases, the substrate and sensory protein domains are linked (Figure 1(c)) to create a single genetic expression unit for intramolecular FRET as opposed to the situation in Figure 1(a). A fluorescent protein biosensor that detects substrate cleavage (Figure 1 and Figure 1(d)) operates through the elimination of FRET after the appropriate protease has been induced. Protease cleavage biosensors are popular indicators of apoptosis.

Back to Spectral Imaging and Linear Unmixing
Back to Interactive Tutorials