Image Formation in the Microscope

In the optical microscope, when light from an illumination source passes through the condenser and then through the specimen, some of the light passes both around and through the specimen undisturbed in its path. This light is called direct, undeviated, or non-diffracted light, and represents the background light. Some of the light interacting with the specimen is deviated or diffracted. Diffracted light is rendered one-half wavelength or 180 degrees out of phase with the direct light that has passed through without encountering obstacles. The one-half wavelength out of phase, caused by the specimen itself, enables this light to cause destructive interference with the direct light when both arrive at the intermediate image plane located at the fixed diaphragm of the eyepiece. The eye lens of the eyepiece further magnifies this image, which finally is projected onto the retina, the film plane of a camera, or the surface of a light-sensitive digital image sensor. 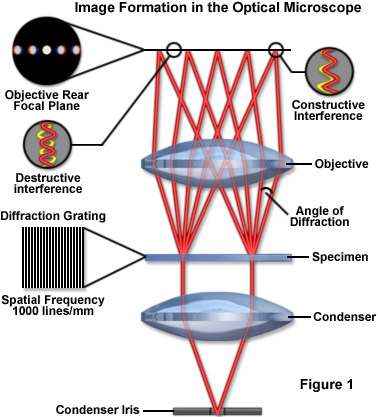 What has happened is that the direct or undeviated light is projected by the objective and spread evenly across the entire image plane at the diaphragm of the eyepiece. The light diffracted by the specimen interferes at the objective rear focal plane (see Figure 1) and is brought into focus at various localized places on the same image plane, where the diffracted light causes destructive interference and reduces intensity, resulting in the generation of a pattern containing a wide spectrum of grayscale values ranging from very dark to very bright. These patterns of light and dark are what we recognize as an image of the specimen. Because our eyes are sensitive to variations in brightness, the image becomes a more or less faithful reconstitution of the original specimen.

To help understand the basic principles of image formation, it is suggested that the reader try the following exercise and use an object of known periodic structure as a specimen. These experiments are easiest to conduct using a stage micrometer or similar grating of closely spaced dark lines. To proceed, place the finely ruled grating on the microscope stage and bring it into focus using first a 10x and then the 40x objective. Remove the eyepiece and, in its place, insert a phase telescope so the rear focal plane of the objective can be observed. If the condenser aperture diaphragm is closed most of the way, a bright white central spot of light will appear at the back of the objective, which is the image of the aperture diaphragm. To the right and left of the central spot, a series of diffraction spectra (also images of the aperture diaphragm; presented in Figure 1) will be present, each colored blue on the part closest to the central spot and colored red on the part of the spectrum farthest from the central bright spot (as illustrated in Figure 2). The intensity of these colored spectra decreases according to how far the spectrum is located from the central spot.

Because the colored spectra disappear when the grating is removed, it can be assumed that it is the specimen itself that is affecting the light passing through, thus producing the colored spectra. Furthermore, if the aperture diaphragm is closed down to a very small opening size, we will observe that objectives of higher numerical aperture grasp more of these colored spectra than do objectives of lower numerical aperture. The crucial importance of these two concepts for understanding image formation will become clear in the ensuing paragraphs. The central spot of light (image of the condenser aperture diaphragm) represents the direct or undeviated light passing through the specimen or around the specimen undisturbed (illustrated in Figure 3(b)). It is called the 0th or zeroth order. The fainter images of the aperture diaphragm on each side of the zeroth order are called the 1st, 2nd, 3rd, 4th, etc. orders respectively, as represented by the simulated diffraction pattern in Figure 3(a), which would be observed at the rear focal plane of a 40x objective. All the captured orders represent, in this case, the diffraction pattern of the line grating as seen at the rear focal plane of the objective. 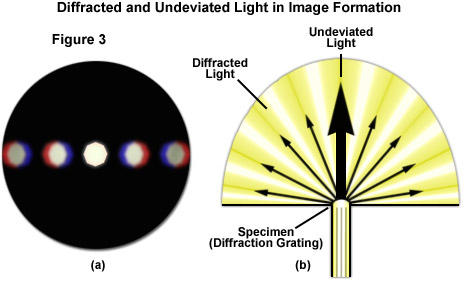 The fainter diffracted images of the aperture diaphragm are caused by diffracted wavefronts, spread out in fan shape, at each of the openings of the line grating (Figure 3(b)). The blue wavelengths are diffracted at a lesser angle than the green wavelengths, which are diffracted at a lesser angle than the red wavelengths. At the rear focal plane of the objective, the blue wavelengths from each slit interfere constructively to produce the blue area of the diffracted image of each spectrum or order. The red and green areas (Figure 3(a)) are spaced a bit further, but arise from the same phenomenon. Where the diffracted wavelengths are one-half wave out of step for each of these colors, the waves destructively interfere to give rise to the dark areas between the spectra or orders. At the position of the zeroth order, all wavelengths from each slit add constructively. This produces the bright white light you see as the zeroth order (see Figures 2, 3 and 4) at the center of the rear focal plane of the objective. 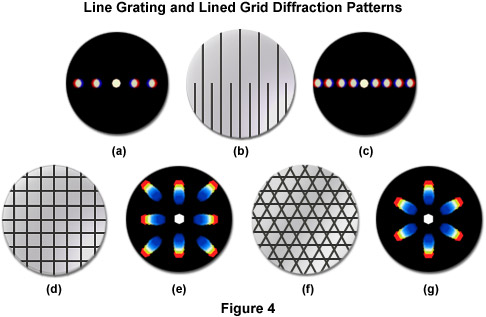 back to top ^Diffracted Light and Resolution

Microscope specimens can be considered as complex line or pattern gratings with details and openings spanning a large range of sizes. This concept of image formation was largely developed by Ernst Abbe, the famous German microscopist and optics theoretician of the 19th Century. According to Abbe (his theories are still widely accepted at the present time), the details of a specimen will be resolved if the objective captures 2 orders of light, such as the 0th order of the light and at least the 1st order of diffraction. The greater the number of diffracted orders that gain admittance to the objective, the more accurately the image will represent the original object. Furthermore, if a medium of higher refractive index than air (such as immersion oil) is used in the space between the front lens of the objective and the top of the cover slip (as shown for a dry objective in Figure 5(a)), the angle of the diffracted orders is reduced and the fans of diffracted light will be compressed. As a result, an oil immersion objective can capture more diffracted orders and yield better resolution than a dry objective (Figure 5(b)). Compare the captured orders in Figure 5(a) and 5(b). Moreover, because blue light is diffracted at a lesser angle than green light or red light, a lens of a given aperture may capture more orders of light when the wavelengths are in the blue region of the visible light spectrum. These two principles explain the classic Rayleigh equation often cited as the basis for calculating point-to-point resolution in the microscope:

where d is the space between two adjacent particles (still allowing the particles to be perceived as separate), λ is the wavelength of illumination, and NA is the numerical aperture of the objective. It is assumed that the microscope also is equipped with a condenser with the same numerical aperture as the objective (without a condenser, the resolution would be half as good resulting in resolved details that are twice as large). The greater the number of higher diffracted orders admitted into the objective, the smaller the details of the specimen that can be clearly separated or resolved. Herein is the value of using high numerical aperture objectives for examining the smallest possible details in various specimens. Likewise, the shorter the wavelength of visible light used, the better the resolution. These ideas explain why high numerical aperture, apochromatic lenses can separate extremely small details in blue light. Placing an opaque mask at the back of the objective blocks the outermost diffracted orders. This either reduces the resolution of the grating lines, or any other specimen details, or it destroys the resolution altogether so that the specimen is not visible. Hence the usual caution not to close down the condenser aperture diaphragm below the suggested two-thirds of the objective's aperture. 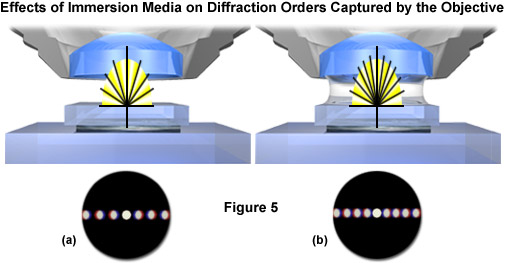 The resulting image at the eyepiece diaphragm level is actually a mosaic of Airy disks that are perceived as light and dark regions of the specimen. Where two disks are so close together that their central bright spots overlap considerably, the two details represented by these overlapping disks are not resolved or separated and thus appear as one (illustrated in Figure 6(e)). In contrast, the Airy disks shown in Figure 6(d) are just far enough apart to be resolved. The basic principle to be remembered is that the combination of direct and diffracted light (or the manipulation of direct or diffracted light) is critically important in image formation. The key locations for such manipulation are the rear focal plane of the objective and the front focal plane of the condenser. This principle is fundamental to most of the contrast improvement methods in optical microscopy. More important, it is of particular significance at high magnification of small details close in size to the wavelength of light. Ernst Abbe was a pioneer in developing these concepts to explain image formation of light-absorbing or amplitude specimens.