One way of increasing the optical resolving power of the microscope is to use immersion liquids between the front lens of the objective and the cover slip. Most objectives in the magnification range between 60x and 100x (and higher) are designed for use with immersion oil. Good results have been obtained with an oil that has a refractive index of n = 1.518, which is close to the refractive index of glass. All reflections on the path from the object to the objective are eliminated in this way. If this trick were not used, reflection would always cause a loss of light in the cover slip or on the front lens in the case of large angles. This tutorial explores how changes in the refractive index of the imaging medium can affect how light rays are captured by the objective, which has an arbitrarily fixed angular aperture of 65 degrees.

One of the most important factors in determining the resolution of an objective is the angular aperture, which has a practical upper limit of about 72 degrees (with a sine value of 0.95). When combined with refractive index, the product:

Objective numerical aperture can be dramatically increased by designing the objective to be used with an immersion medium, such as oil, glycerin, or water. By using an immersion medium with a refractive index similar to that of the glass coverslip, image degradation due to thickness variations of the cover glass are practically eliminated whereby rays of wide obliquity no longer undergo refraction and are more readily grasped by the objective. Typical immersion oils have a refractive index of 1.51 and a dispersion similar to that of glass coverslips. Therefore, light rays passing through the specimen encounter a homogeneous medium between the coverslip and immersion oil and are not refracted as they enter the lens, but only as they leave its upper surface. It follows that if the specimen is placed at the aplanatic point of the first objective lens, imaging by this portion of the lens system is totally free of spherical aberration. 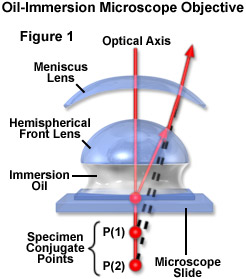 The general design of a practical oil immersion objective includes a hemispherical front lens element, followed by a positive meniscus lens and a doublet lens group. Presented in Figure 1 are the aplanatic refractions that occur at the first two lens elements in a typical apochromatic oil immersion objective. The specimen is sandwiched between the microscope slide and cover glass at point P, the aplanatic point of the hemispherical lens element. Light rays refracted at the rear of the hemispherical lens appear to proceed from point P(1), which is also the center of curvature for the first surface of the meniscus lens. The refracted light rays enter the meniscus lens along the radius of its first surface and experience no refraction at that surface. At the rear surface of the meniscus lens, light rays are refracted aplanatically, so they appear to diverge from point P(2). Refraction of the light rays at the surfaces of subsequent lens groups in the objective complete the convergence of light rays originating from point P, thus forming the intermediate image.

Properly designed oil immersion objective lenses also correct for chromatic defects that are introduced by the first two lens elements, while introducing a minimum amount of spherical aberration. The fact that the light cone is partially converged before entering the first lens element aids in the control of spherical aberration. It should be noted that employing an oil immersion objective without the application oil between the coverslip and first lens element results in defective images. This is due to refraction that occurs at the surface of the front lens, which introduces spherical aberration that cannot be corrected by subsequent lens components within the objective.

The advantages of oil immersion objectives are severely compromised if the wrong immersion fluid is utilized. Microscope manufacturers produce objectives with tight tolerances to refractive index and dispersion, which require matching values in the liquid placed between the cover glass and objective front lens. It is advisable to employ only the oil intended by the objective manufacturer, and to not mix immersion oils between manufacturers to avoid unpleasant artifacts such as crystallization or phase separation.

Objectives that use water and/or glycerin as an imaging medium are also available for applications with living cells in culture or sections of tissue immersed in physiological saline solution. Plan apochromat water immersion lenses are equipped with correction collars and numerical apertures up to 1.2, slightly less than their oil immersion counterparts. These objectives allow microscopists to focus through up to 200 microns of aqueous media and still retain excellent optical correction. The downside is that high numerical aperture water immersion lenses often cost many thousands of dollars and the image can still degrade when the objective is focused deeply through refractile tissue or cell parts.