One of the important parameters of illumination sources is their coherence, which is somewhat related to brightness due to the fact that extremely bright light sources are more likely to be highly coherent. In fact, the term brightness is actually more far useful to describe the ability of a light source to focus a large number of photons into a small area, whereas coherence is a measure of the ability of wave functions that describe these photons to interfere with each other. Light sources that are relatively incoherent limit their interference to the microscope focal plane while highly coherent sources generate reflections from virtually every dust particle and imperfection in the optical system, and thus are less desirable. In general, non-laser light is distinguished from laser light by its much lower degree of coherence. Incoherent light, such as sunlight from a cloudy sky, and coherent light from a laser, are each limiting theoretical constructs. Even though using these conditional limits simplifies the process of writing equations that describe the image formation process in the microscope, neither coherence extreme can actually be realized in practice.

The tutorial initializes with an incoherent light source (a mercury arc lamp) extruding spherical wavefronts of red, green, and blue light to simulate broadband emission. Light emitted by the lamp passes through a pinhole to produce spatially coherent wavefronts that pass through a filter to yield monochromatic light. In order to operate the tutorial, use the Pinhole Aperture Size slider to widen or constrict the pinhole, thus altering the coherence of light passing through. Filter color can be selected by clicking on the Wavelength Filter buttons in the lower right-hand side of the window. The gray button simulates a netural density filter, while the blue, green, and red buttons simulate these respective filters.

In a practical sense, light is considered to be non-coherent when no speckle effects are present and coherent when they are. Most light sources, in fact, exhibit both spatial coherence related to the angular size of the source and temporal coherence related to its wavelength profile. Even though the sun is considered to be an incoherent source, sunlight has enough coherence to impart speckle to the image formed in a microscope. Tungsten filament lamps and LEDs have relative low spatial coherence due to the large size of the emitter. In contrast, arc lamps possess higher coherence unless a large area of the plasma is utilized as the source. For brightfield and reflected microscopy applications, illumination having low coherence is generally desired, while light with higher coherence is required for phase and interference imaging modes. The process of fluorescence involves a sufficient number of steps between excitation and emission that the coherence of the illuminating light is usually unimportant, and the light emitted from the specimen is basically non-coherent. 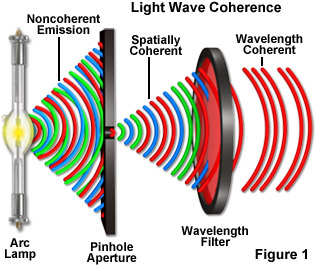 If the coherence of the light source is too high, images develop fringes produced by interference of the coherent wavefronts reflected from internal optical surfaces, including the lenses, mirrors, dust windows and, in particular, the cover glass. This complex interference pattern can appear as sharply defined concentric rings, but more commonly it is manifested as a high-contrast granular speckle, superimposed upon the image, obscuring details. Furthermore, if the specimen is transparent and has multi-layered microstructure, the speckle pattern becomes more complex. Broad spectrum illuminating light has low temporal coherence, and the speckle averages out. In most situations, illumination with low coherence is preferable for both widefield and confocal microscopy. On the other hand, by adjusting the Köhler illumination system to reduce the effective size of the source (reducing the condenser aperture diaphragm size), non-laser light sources can also deliver the higher coherence level necessary for interference microscopy techniques.

Speckle effects are bright if interference of light from within the scattering center around a particular point is constructive with that from the background, and dark if destructive interference occurs. The apparent size of the scattering centers and that of the individual speckles are related to the resolution limit (or numerical aperture) of the optical system. In the case of non-coherent illumination, overlap between speckle patterns having different wavelengths partially cancels out to produce a lower contrast pattern. Because speckle results from interference phenomena, any movement of the optical system or the specimen will result in a complex change of the speckle pattern in time.

One of the primary functions of a Köhler illumination system is to render the light source homogeneous at the image planes and to control its coherence to a limited degree. However, only a completely coherent system will not scramble light to any significant extent. Additional scrambling is often necessary to decrease spatial homogeneity, as well as the spatial and temporal coherence. Although most light scramblers (such as a fiber optic light guide) have been designed to work with highly coherent laser light, the same techniques can also be applied to reduce the coherence of light from other sources. In fact, modern metal halide lamps are designed to gather light emitted by the arc with an elliptical collector that focuses the concentrated illumination into a liquid light guide for delivery of non-coherent light to the microscope optical train.