Point-spread engineering techniques designed to circumvent the diffraction barrier all rely on a time-sequential readout of fluorescent probe photoswitching. The first technique successfully applied to superresolution biological imaging of fixed cells was the RESOLFT method named stimulated emission depletion (STED), which employs spatially modulated and saturable transitions between two molecular states to engineer improvements to the point-spread function. In STED microscopy, the specimen is illuminated by two synchronized ultrafast co-linear sources consisting of an excitation laser pulse followed by a red-shifted depletion laser pulse that is referred to as the STED beam. Generally, the excitation laser pulse width is of shorter duration than that of the STED pulse (although both are usually in the 10 to 300 picosecond range). Pulsed lasers take advantage of the time scales for molecular relaxation and interference of coherent light to produce radially symmetric depletion zones. Fluorophores positioned within the zero node region of the STED beam are allowed to fluoresce upon exposure to the excitation beam, whereas those fluorophores exposed to the STED beam are transferred back to their ground (non-fluorescent) state by means of stimulated emission. The non-linear depletion (following an exponential curve) of the excited fluorescent state by the STED beam constitutes the basis for imaging at resolutions that are below the diffraction barrier.

The tutorial initializes with a STED and excitation beam appearing superimposed over a virtual specimen in the upper portion of the tutorial window. The specimen contains dark rectangles representing individual fluorophore molecules highlighted by a white curve that represents the analog fluorescence signal. In order to operate the tutorial, use the mouse cursor to move the Scan Progress slider back and forth. As the cyan excitation beam (which is narrowed by the red STED depletion laser wavefields) traverses across the specimen, the black fluorophore boxes that lie in the zero node region of the STED beam become fluorescent (turn green). Simultaneously, the fluorophore(s) are noted at the CCD Image Plane and are recorded in the Image at the lower portion of the tutorial window. The tutorial can be run automatically using the Autoscan button or re-initialized with the Reset button.

STED takes advantage of the RESOLFT concept by significantly modifying the shape of the excitation point-spread function by manipulating the phase, pulse width, and intensity of the excitation and depletion lasers. Although both lasers remain diffraction-limited as their beams pass through the microscope optical train, the STED pulse is modified by a phase modulator to feature a zero-intensity node at the center of focus with exponentially growing intensity toward the periphery. This configuration gives rise to a doughnut-shaped beam that surrounds the central focal point (and point-spread function) of the excitation laser. Only at the exact center of focus (the node) is the intensity of the STED beam equal to zero (Figure 1(b)). The wavelength and duration of the STED beam pulse are chosen to coincide with the emission maximum and saturation intensity, respectively, of the fluorophore under investigation. Deactivation of the fluorophores occurs throughout the focal volume except at the center of focus. At the high depletion laser powers used for STED (often exceeding 250 megawatts per square centimeter), the fluorophores are almost instantaneously driven to the ground state by stimulated emission. Substantially reducing the laser power (as discussed below) enables formation of a non-fluorescent state via a number of other mechanisms, including driving the fluorophores into a metastable triplet state, formation of charge-transfer states, or photoswitching. 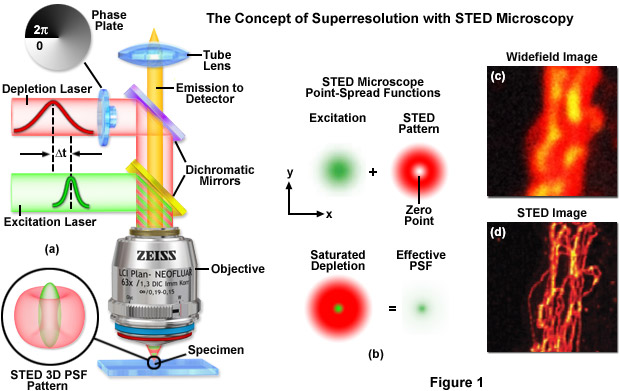 A typical STED optical train configuration is presented in Figure 1(a) showing the phase plate, excitation and depletion lasers (red and green beams, respectively), dichromatic mirrors, tube lens, and objective. A three-dimensional drawing showing the STED beam profiles at the specimen plane is also shown. Excitation and depletion are accomplished with synchronized laser pulses that are focused by the objective onto the specimen plane. Fluorescence emission is registered on a photomultiplier detector (not shown). The focal spots produced by the STED and depletion lasers are simulated as green and red patterns, respectively, in Figure 1(b). The green laser excitation spot is superimposed on the red STED depletion laser profile to dramatically reduce the size of the effective point-spread function. Comparison of widefield (Figure 1(c)) and STED (Figure 1(d)) images of microtubules stained with Alexa Fluor 594 demonstrate the increased spatial resolution afforded by point-spread function engineering methodology.

The doughnut-shaped depletion laser wavefield in STED effectively narrows the point-spread function of the excitation laser to increase resolution beyond the diffraction limit, which in the best cases can approach 20 nanometers in the lateral dimension. Sharpening of the focal spot through point-spread function engineering is thus equivalent to expanding the microscope spatial frequency passband. In order to obtain a complete image, the central zero produced by the STED lasers is raster scanned across the specimen, similar to the action of a confocal microscope. Among the benefits of STED microscopy are that the effective resolution increase is completely dictated by the experimental configuration and the laser powers applied to the specimen. Furthermore, the image is recorded as the beam scans along the specimen and requires no additional processing, and image acquisition times can approach the speed of any laser scanning confocal microscope. The effective resolution increase with STED is proportional to the power of the depletion laser, but can become problematic at extremely high laser powers that are likely to result in rapid photobleaching and destruction of the probe. Regardless, a wide range of fluorophores have been successfully used with STED (see Table 1), including fluorescent proteins, ATTO dyes, Alexa Fluors, DyLights, and several other synthetics.

Advanced versions of STED have been implemented to address improvements in axial resolution for three-dimensional superresolution imaging of ensembles. By coupling two STED depletion lasers with an opposed objective 4Pi-style configuration, Stefan Hell and co-workers have succeeded in generating significantly improved resolution in both the lateral and axial dimensions. The technique has been termed iso-STED due to the fact that it yields a tunable, nearly isotropic (spherical) point-spread function with a resolution approaching 40 nanometers along the axes. Such a symmetrical focal spot should prove beneficial in obtaining high resolution optical sections from deep within biological cells and tissues. The complex instrument configuration consists of dual STED lasers that are combined and sent to both objectives using a beamsplitter. Digital image processing can additionally be employed to reduce the effect of side-lobes and other artifacts that compromise the point spread function. A more compact and simpler STED instrument based on a supercontinuum laser source has been designed for three-dimensional imaging using a single lens to gather optical sections at a lateral resolution of 45 nanometers and an axial resolution of approximately 100 nanometers.

Back to Superresolution Microscopy
Back to Interactive Tutorials