Throughout history, the purpose of the optical or light microscope has not always been for research and the production of beautiful, accurate images. For many centuries, the construction of microscopes and the underpinning optical systems was entirely an issue of exterior cosmetic craftsmanship, with the design of optical components lagging seriously behind advances in the fabrication of microscope bodies and frames. Greater trouble and effort was invested in the outer appearance of these early instruments, while their performance depended on the experience of the lens grinders, and the (good or bad) results obtained were often sheer coincidence. In many cases, microscopes were simply toys or show pieces intended to increase the prestige of their owners. The dichotomy between appearance and quality of the images such instruments provided was, by today's standards, striking (see Figure 1). Nevertheless, microscopy became a beloved pastime of the wealthy in the 18th century and many nights were spent observing local specimens, an affair that often involved entire families. For example, Elizabeth Charlotte of the Palatinate, who became famous as the sister-in-law of Louis XIV, owned a valuable microscope and used it regularly. She correctly predicted that this instrument would be of inestimable value for medical applications in the future. Her foresight was almost visionary at that time. 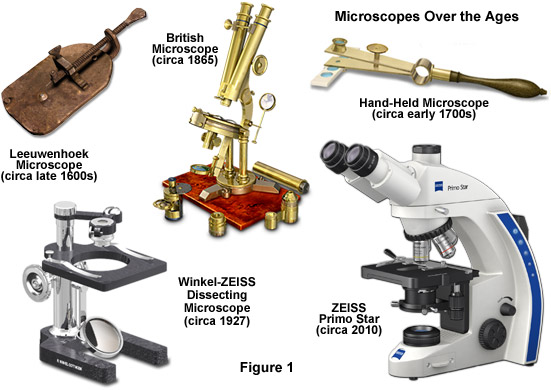 While working in a store where magnifying glasses were used to count the number of threads in cloth, Anton van Leeuwenhoek of Holland, who is often referred to as the father of microscopy, taught himself new methods for grinding and polishing small, curved lenses that magnified up to 270 diameters. He went on to build microscopes that gave way to several noted biological discoveries. Leeuwenhoek was the first to observe and describe bacteria (after viewing the very little living animalcules in the mouth of an old man who had never cleaned his teeth), the circulation of blood corpuscles in capillaries, and living sperm cells, among a host of other unique (at the time) specimens. In England, Robert Hooke re-confirmed Leeuwenhoek's discoveries of tiny living organisms in a drop of water. He replicated Leeuwenhoek's light microscope and proceeded to improve upon its design.

Hooke was also an avid student of fossils and geology. As the first person to examine fossils with a microscope, he observed close similarities between the structures of fossil shells and petrified wood, as well as living wood and living mollusk shells. His examinations proved that dead wood could be turned to stone by the action of water that is rich in dissolved minerals. As the water seeped into the wood, the saturated solution would slowly deposit minerals throughout the wood. In his book Micrographia, published in 1665, Hooke concluded that the shell-like fossils he studied actually represented organisms that no longer existed on Earth. Two and a half centuries before Darwin, Hooke realized that the fossil record proves there is transformation among the life forms on the planet, and that species have both materialized and disappeared throughout the history of life on earth. His revelations would continue to challenge the field of natural science.

Another breakthrough, in the 18th Century, was the invention of the Achromat lens system by Chester Moor Hall. Around the year 1733, he managed to build the first achromatic objective, consisting of a combination of a convex Crown glass and a concave Flint glass. Hall tried to keep this a secret by having one type of glass manufactured by one company and the other by another company. Unbeknownst to him, both companies used the same lens shop which realized, of course, that the final customer was one and the same person. It took another 25 years until John Dollond picked up on the idea and got a patent for "a new method of making the object glasses of refracting telescopes by compounding mediums of different refractive qualities".

During the 19th Century, the exacting natural sciences experienced an enormous upswing in activity. In the 1820s and 1830s, the science of light and the theory of optical imaging were placed on a sound foundation. One of the most successful researchers in this field was Joseph von Fraunhofer (1787-1826). Astronomy was the main field of Fraunhofer's activities, and his most noted achievement is the first description of the dark lines of the solar spectrum as reference points for the measurement of refraction indexes. But most important to the history of microscopy, Fraunhofer also refined the achromat by using scientific and precise manufacturing methods, creating what is now known as the achromat system, the most commonly deployed optical lens system with chromatic aberration correction, and for basic advancement of knowledge on the diffraction of light. Early microscopists were hampered by optical aberration, blurred images, and poor lens design, which hampered high-resolution observations until late in the 1800s. Aberrations were partially corrected by the mid-19th Century with the introduction of Lister and Amici achromatic objectives that reduced chromatic aberration and raised numerical apertures to around 0.65 for dry objectives and up to 1.25 for homogeneous immersion objectives. It would take a master craftsman to improve lens design further.

back to top ^Enter Carl Zeiss

Within this period (the 1800s) of innumerable technical advances, a mechanic named Carl Zeiss (Figure 2) began his own business in the German university town of Jena, Thuringia, with the goal of providing researchers with high-quality instruments. Between 1846 and 1866, microscopes of uniformly high quality were built in Zeiss' workshop in accordance with very strict rules of craftsmanship. In the beginning, these were very simple instruments that were used as dissection microscopes, but in 1857 the Zeiss workshop produced the first genuine compound microscope (equipped with an eyepiece and an objective). The new instrument was called the Stativ 1, which combined practical functionality with the skilled optical refinement provided by a craftsman. 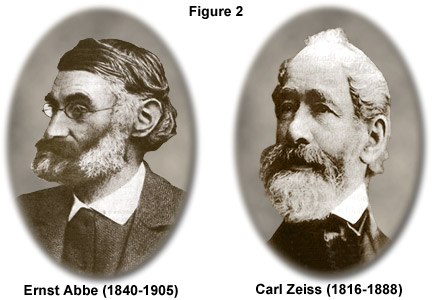 After almost 20 years, Zeiss was employing about 20 qualified staff members and took great pride in what had become a prosperous business. He knew that his instruments were good, but he refused to accept the trial and error method used at the time for the production of optics. Zeiss also was aware that competition from other microscope manufacturers would eventually bypass his accomplishments if he failed to continue to produce innovations. With the ultimate goal of creating reproducible products, Zeiss acknowledged that his manufacturing procedure had to be based on precise rules and strict guidelines, or as he once said:

"The working hand should have no other function than to precisely implement the shapes and dimensions of all the design components determined beforehand by computation."

For assistance in this endeavor, Zeiss formed a partnership with Dr. Ernst Abbe (Figure 2), a brilliant physicist and mathematician. Abbe was appointed as the research director of Zeiss Optical Works in late 1866. For the next six years, the team worked intensively to lay the scientific foundations for the design and fabrication of advanced optical systems. In 1869, they introduced a new illumination apparatus that was designed to improve the performance of microscope illumination. Three years later, in 1872, Abbe formulated his wave theory of microscopic imaging and defined what would become known as the Abbe Sine Condition. Several years later, Zeiss was producing a line of 17 different objectives, including three immersion systems, all featuring a level of image quality unknown until then. The construction of microscopes on a sound theoretical basis was possible at last, and still is today. The original formula for the calculation of the possible resolution of the microscope:

is still utilized more than a century later. The Zeiss enterprise continued to push onward in the late 1800s. Abbe became an equal partner, and forward-thinking intelligence became the inherent capital of the young company. In his later years, Abbe became equally famous as a social reformist. Several problems still remained for Zeiss Optical Works however, since the quality of optical glass produced during the period was not sufficient to provide the theoretical resolution that was dictated by Abbe's sine condition. The glass used in the construction of microscope lenses was not homogeneous and it tended to undergo a phase separation during cooling, which led to a varying refractive index throughout the glass, and therefore, light waves passing through these lenses were refracted unpredictably. In short, first-rate resolution was unattainable with the poor quality glass. 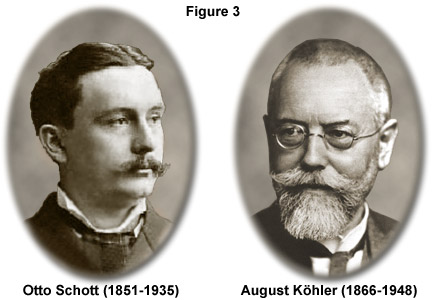 Abbe first met Otto Schott, a glass chemist, in 1881. Over the next several years, Abbe and Schott (Figure 3) developed several new glass formulas and made adjustments to the mixing and annealing process to eliminate internal defects and produce optical-grade glass with a uniform refractive index. In 1884, Schott, Abbe, and Zeiss formed a new company known as "Jenaer Glaswerk Schott und Genossen". Continued experimentation with glass recipes and preparation techniques yielded highly successful results, and in 1886, they introduced a new type of objective, the apochromat. By this time, an incredible 44 different types of optical glass were being produced. The creation of the apochromat objectives (with and without immersion media) eliminated color aberrations, which greatly assists bacteriologists in identifying infectious bacteria, and brought the resolving power of the microscope to the limit we know today. The progress made in the development of objectives led to fields of view larger than anything ever achieved before. In the course of time, it also became evident that more attention would have to be paid to illumination.

Professor August Köhler (1866-1948; Figure 3) became an early member of staff at Carl Zeiss in Jena, and in 1893 he published guidelines for an innovative scheme to illuminate microscope specimens. Köhler cleverly devised a microscope illumination system that made it possible to use the entire resolving power of Abbe's objectives. The Köhler illumination system provides homogeneously illuminated images. By incorporating a field iris diaphragm into the microscope illumination beam path, stray light was minimized and a simple procedure ensured proper positioning of the condenser for highest resolution and desired contrast (it is particularly beneficial that the aperture diaphragm in the condenser allows the image contrast and the resolving power to be balanced against each other without any loss in the consistency of the image brightness). Köhler's innovation was important in microphotography at the time of its development, and has since become a highly significant method for virtually all forms of optical microscopy. Knowledge and observance of Köhler's rules and the associated settings of the microscope (whether automatically via personal computer and motorized functions or manually) are still essential today.

Early in the twentieth century, microscope manufacturers began parfocalizing objectives, allowing the image to remain in focus when the microscopist exchanged objectives on the rotating nosepiece. In 1924, Zeiss introduced a LeChatelier-style metallograph with infinity-corrected optics, but this method of correction would not see widespread application for another 60 years. Shortly before World War II, Zeiss created several prototype phase contrast microscopes based on optical principles advanced by Frits Zernike. Several years later the same microscopes were modified to produce the first time-lapse cinematography of cell division photographed with phase contrast optics. This contrast-enhancing technique did not become universally recognized until the 1950s and is still one of the methods of choice for many cell biologists today.

Physicist Georges Nomarski introduced improvements in Wollaston prism design for another powerful contrast-generating microscopy theory in 1955. This technique is commonly referred to as Nomarski interference or differential interference contrast (DIC) microscopy and, along with phase contrast, has allowed scientists to explore many new arenas in biology using living cells or unstained tissues. Robert Hoffman introduced another method of increasing contrast in living material by taking advantage of phase gradients near cell membranes. This technique is now termed Hoffman Modulation Contrast, and is available as optional equipment on most modern microscopes.