Illumination of the specimen is the most important variable in achieving high-quality images in microscopy and critical photomicrography or digital imaging. Köhler illumination was first introduced in 1893 by August Köhler of the Carl Zeiss corporation as a method of providing the optimum specimen illumination. The manufacturers have designed modern microscopes so that the collector lens and any other optical components built into the base of the microscope will project an enlarged and focused image of the lamp filament onto the plane of the aperture diaphragm of a properly positioned substage condenser. Closing or opening the condenser diaphragm controls the angle of the light rays emerging from the condenser and reaching the specimen from all azimuths. Because the light source is not focused at the level of the specimen, the light at specimen level is essentially grainless and extended, and does not suffer deterioration from dust and imperfections on the glass surfaces of the condenser. Opening and closing of the condenser aperture diaphragm controls the angle of the light cone reaching the specimen. The setting of the condenser's aperture diaphragm, along with the aperture of the objective, determines the realized numerical aperture of the microscope system. As the condenser diaphragm is opened, the working numerical aperture of the microscope increases, resulting in greater resolving power and light transmittance. Parallel light rays that pass through and illuminate the specimen are brought to focus at the back focal plane of the objective, where the image of the variable condenser aperture diaphragm and the image of the light source will be seen in focus. 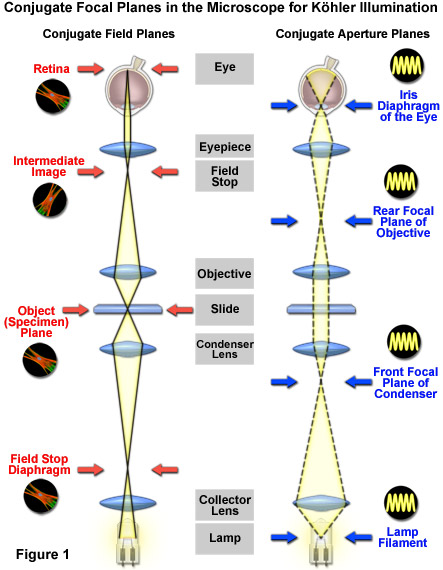 Proper configuration of the microscope in regards to illumination is possibly one of the most misunderstood concepts in optical microscopy, and is a critical parameter that must be fulfilled in order to achieve optimum performance. The intensity and wavelength spectrum of light emitted by the illumination source is of major importance, but even more imperative is that light emitted from various locations on the lamp filament be collected and focused at the plane of the condenser aperture diaphragm. The conjugate field and aperture planes critical for establishing proper illumination in the microscope are illustrated in Figure 1. In this section, the guidelines are described for establishing Köhler illumination (used in transmitted and reflected light microscopy). Successful observation and imaging should occur when this procedure is executed correctly.

The first steps necessary to prepare the microscope for Köhler illumination involve basic procedures necessary to observe a specimen under brightfield conditions. First, if the condenser contains phase annulus rings, differential interference contrast prisms, or other masks and filters, rotate the turret to the brightfield aperture, which should be open and not house a filter or prism. Second, choose a suitable specimen. The best specimens consist of well-stained brightfield samples, such as very thin (8 micrometer or less) animal or plant tissue. If a prepared slide is not available, a small section of 35-millimeter film (such as a transparency or negative) about 10 x 10 millimeters in size can be taped or glued to a clean glass microscope slide and flattened with a cover slip.

The microscope should now be properly configured for observation of specimens in Köhler illumination, but only for the objective that was used to set the instrument. When another objective is rotated into the optical train, you should always adjust the condenser aperture and field diaphragm for optimum illumination (in effect, contrast versus resolution) conditions. However, it is usually not necessary to remove the eyepiece each time a new objective is used. Once the aperture diaphragm size has been set for the 10x objective, it is often sufficient to adapt the size for other objectives by visualizing the image. First open the aperture until the stop is reached, and then close it down slowly until the image begins to get slightly darker and the contrast simultaneously increases. Often, the most important parameter is to achieve suitable contrast.

From the above discussion it is evident that the condenser aperture diaphragm should be set to a position that will provide a compromise mixture of direct and deviated light that depends, to a large degree, on the absorption, diffraction, and refraction characteristics of the specimen. This must be accomplished without overwhelming the image with artifacts that obscure detail and present erroneous enhancement of contrast. The amount of image detail and contrast necessary to produce the best photomicrograph is also dependent upon refractive index, optical characteristics, and other specimen-dependent parameters.

When the aperture diaphragm is erroneously closed too far, deviated light begins to obscure direct illuminating rays, resulting in diffraction artifacts that cause visible fringes, banding, and/or pattern formation in photomicrographs. Other problems, such as refraction phenomena, can also produce apparent structures in an image that are not real. Alternatively, opening the condenser aperture too wide causes unwanted glare and light scattering from the specimen and optical surfaces within the microscope. This leads to a significant loss of contrast and washing out of image detail. The correct setting will vary from specimen to specimen, and the experienced microscopist will soon learn to accurately adjust the condenser aperture diaphragm (and numerical aperture of the system) by observing the image without having to view the diaphragm in the back focal plane of the objective. In fact, many microscopists believe that critical reduction of the numerical aperture of the microscope system to optimize image quality is the single most important step in photomicrography.

The illumination system of the microscope, when adjusted for proper Köhler illumination, must satisfy several requirements. The illuminated area of the specimen plane must be at least as large as the field of view for any given objective. Also, the light must be of uniform intensity and the numerical aperture must vary from a maximum (equal to that of the objective) to a minimum value that will depend upon the optical characteristics of the specimen.